YOLANDA IS ABLE TO ELEVATE THE SOUL, ASPIRES TO THE GOOD BEYOND THE BEAUTIFUL, DRAGS BEYOND THE REAL, INTO A SPIRITUAL WORLD “. IN ANOTHER DIMENSION, WHICH THROUGH OUTSIDE OBSERVATION TAKES BACK TO THE WORLD OF INTERIORITY.

A “free soul” like her
A mirror of the feeling of Yolanda Mediavilla, a Spaniard who impresses her homeland delicacy on her canvases. The soul of whoever captures the essence of the paintings breathes, in an empathic atmosphere between the expressiveness of the artist and the impression collected by the observer.
It is difficult to be able to carve the sense of a spirituality and a sweet feeling in the canvas. But Yolanda succeeds precisely in this intent through the subtle use of colors, white in the first place.
The sense of motherhood through barely hinted signs of a female bride’s body in white alongside a gray round. The passion of Christ through golden drops that weep the body just hinted at as an angelic figure.
The boat suspended like a giant eye observing you closely. Jolanda manages to “elevate the soul – as Enrico Formica, curator of the exhibition used to say – she aspires to the good as well as to the beautiful, drags beyond reality, into a spiritual world”. In another dimension, which through external observation brings back to the world of interiority. With delicacy and courage, as Yolanda is in her life. An exhibition: the mirror of a soul. 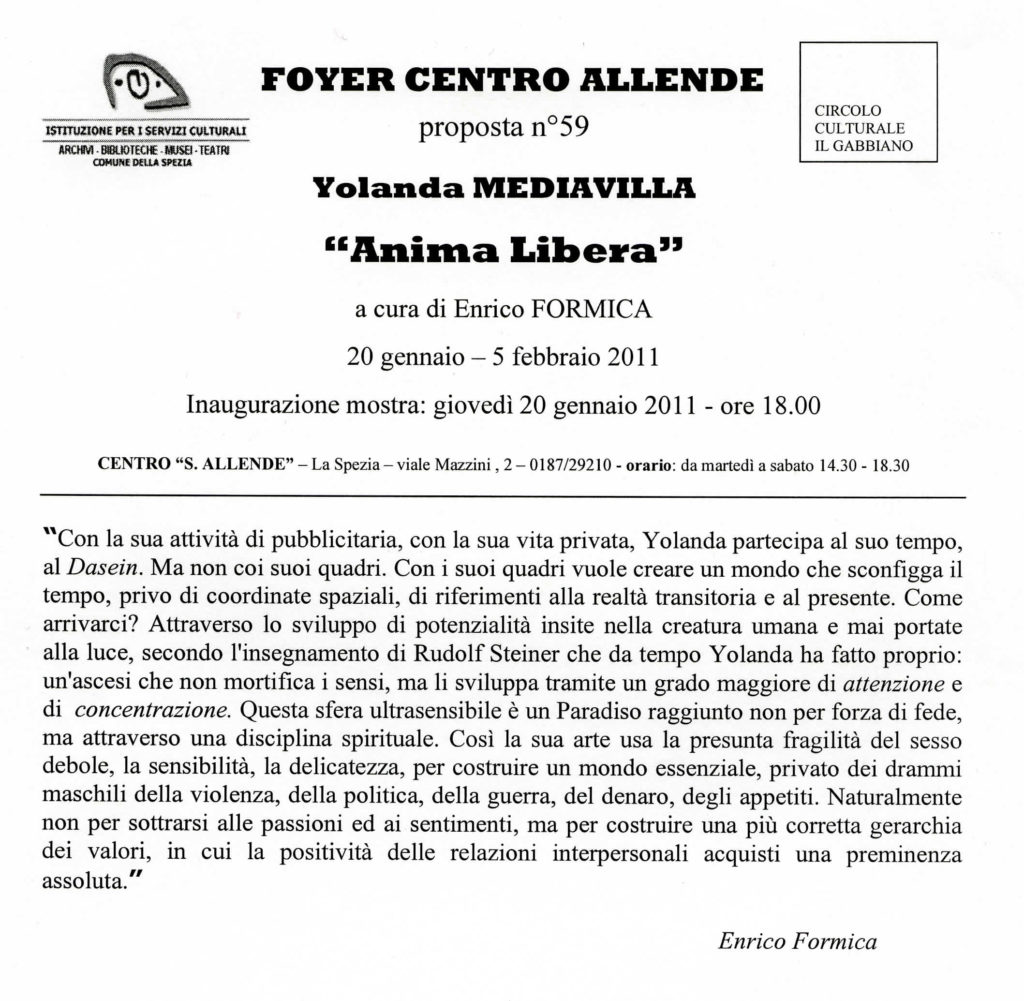 A Year of Growth

Life involves us too much. We cannot slow down, concentrate, reflect on its true essence. We are overwhelmed by presumed commitments, by haste, by myths masked by common sense. Yet all of us have at times experienced the perception of the finitude of existence, of its being locked in the cage of space and time, insurmountable limits. It is not necessary to read Being and Time to intuitively grasp the difference between Sein and Dasein, the First Letter of St. Paul to the Corinthians (videmus per spaecula in aenigmate) or Leopardi’s Infinity is enough and advances.
Is there therefore a time of being, outside of existing, that does not coincide with death? Although the search for this dimension is conceptually crazy and impossible, we cannot but feel the pain of its absence.
With his advertising activity, with her private life, Yolanda participates in her time, in Dasein. But not with her paintings. With her paintings she wants to create a world that defeats time, devoid of spatial coordinates, of references to transitory reality and to the present. How to get there? Through the development of potentialities inherent in the human creature and never brought to light, according to the teaching of Rudolf Steiner who for some time Yolanda has made her own: an ascent that does not mortify the senses, but develops them through a greater degree of attention and concentration.
This ultra-sensitive sphere is a Paradise achieved not by force of faith, but through a spiritual discipline. Thus her art uses the alleged fragility of the weaker sex, the sensitivity, the delicacy, to build an essential world, deprived of the male dramas of violence, politics, war, money, appetites. Of course not to escape passions and feelings, but to build a more correct hierarchy of values, in which the positivity of interpersonal relationships acquires absolute pre-eminence.
If Yolanda’s works are arranged in chronological order, a progressive process of asceticism, of tapering, of drying up becomes evident. What elements innervate this structurally ethereal world, washed out, without color and without things? Human spirituality, which is rendered through a radical stylization of the figure, and the utopia of union, of the embrace, of the encounter.
Thus his history as an artist (after a prehistory, in reality, long and full of satisfactions, of happy abandonment to color and life) starts from the Historia, from vague but unequivocal Spanish references, still linked to a filtered and interpreted reality, already praised of its most conspicuously recognizable elements.
But soon the world disappears, with a whisper, not with a bang, as Pound says, and the background is more and more rarefied, it becomes a desert, an emptiness, an infinity. We observe the figures progressively become less and less identifiable ghosts, creatures with the breath of a dawn that tomorrow for everyone / reappears, white but without wings / of horror (Montale, Hitler’s Spring). The Ascension scene is enigmatic, the nature of the figures involved mysterious as religious symbols of ancient civilization. Wound and Kyoto are already conceptual indications, and not explanatory captions: the blood of one and the almond of the eyes of the other are traces, geographical arrows for new departures.

In the following works the color disappears and everything is white: a sinuous and liberty line, in relief, sculpts abstract concepts as if they were concrete and present. The disappearance of color makes up for a material research that the photo-graphic reproductions, even accurate ones, cannot faithfully render: the background of the paintings thickens and thickens, mellow but not rough, real and abstract at the same time. Like Dante in Paradise, the artist’s effort is to make the unrepresentable true and alive, the inconceivable that exists beyond earthly coordinates. However, a residue of stylization remains in Crystallization or in feminine energy, an external elegance that could be mistaken for calligraphy.
The series of works with the common title Unione undertakes to establish the definitive mood: the residual of the fin de siécle style has been abandoned, the line becomes primordial and archetypal, atemporal; the nervous and irregular line deeply affects the top and brings out the consistency of the material. At this point they can also return, the figures, to such an extent they belong to another planet, a psychic planet (not for nothing we have titles like Pisces / Unconscious). They overlook this world, but they do not belong to it. If anything, the large dimensions offer these works as mirrors, not faithful mirrors but Alice’s mirrors, or windows on parallel worlds, magical extensions to enter. The conquest of three-dimensionality, as Rothko teaches us, is also a fact of dimensions: navigating the paintings, getting lost in them … The large table La mamma is to be considered one of the boldest and highest outcomes of Yolanda’s entire production.
Control, Embrace, Earth recover a color that is precisely earth, materiality, with a barbaric trait reminiscent of the twentieth century current (Tozzi, Campigli). It is a figuration that has only metaphorical and non-descriptive intentions, it produces masks or avatars with which to enter into (spiritistic?) Communication, categories of being.
There are no models and points of reference in the research initiated by Yolanda. They are solitary and personal works, not comparable to specific figures, to which no direct derivation can be attributed. There you can find something of the collages of Matisse or of the less known Braque, the figurative one of the second postwar period, in which doves travel in abolished skies. The themes and the accentuated stylization of the shilouettes refer to Virgilio Guidi of Encounters and Waiting, but without harshness and Beckettian nihilism. And there are echoes of the Catalan lesson (from Tapiès to Barcelò) in the thickness of the layers, obtained through the careful use of materials: gypsum, clay and earth absorb light and luminosity and create a material limbo, a base on which the stylized contours float.
Understanding this world is also a tactile, atmospheric matter. And the last, very recent phase, still open and in full development, is definitely launching towards the occupation of space. Inner strength and self-knowledge are experiments, working hypotheses still in progress, but they suggest results of great complexity linked to a multiple, and no longer frontal, perception of the works. The time has come for Yolanda to ensnare the astonished spectator, to convert him, to physically involve him in this hyperspace whose construction appears almost the result of a scientific modus operandi, if we consider the linearity and coherent intensification of the experiments conducted.
I imagine that an exhibition by Yolanda, at this point, would appear as a concentrated universe of curtains, veils, tables, mirrors, stratified opacifications to welcome the spirits, create a psychic communion, cultivate a hope of collective salvation that the obtuse reason does not can grasp.

available in e-book and paper format

We use cookies on our website to give you the most relevant experience by remembering your preferences and repeat visits. By clicking “Accept”, you consent to the use of ALL the cookies.
Do not sell my personal information.
Cookie SettingsAccept
Manage consent

This website uses cookies to improve your experience while you navigate through the website. Out of these, the cookies that are categorized as necessary are stored on your browser as they are essential for the working of basic functionalities of the website. We also use third-party cookies that help us analyze and understand how you use this website. These cookies will be stored in your browser only with your consent. You also have the option to opt-out of these cookies. But opting out of some of these cookies may affect your browsing experience.
Necessary Always Enabled
Necessary cookies are absolutely essential for the website to function properly. These cookies ensure basic functionalities and security features of the website, anonymously.
Functional
Functional cookies help to perform certain functionalities like sharing the content of the website on social media platforms, collect feedbacks, and other third-party features.
Performance
Performance cookies are used to understand and analyze the key performance indexes of the website which helps in delivering a better user experience for the visitors.
Analytics
Analytical cookies are used to understand how visitors interact with the website. These cookies help provide information on metrics the number of visitors, bounce rate, traffic source, etc.
Advertisement
Advertisement cookies are used to provide visitors with relevant ads and marketing campaigns. These cookies track visitors across websites and collect information to provide customized ads.
Others
Other uncategorized cookies are those that are being analyzed and have not been classified into a category as yet.
SAVE & ACCEPT